Before understanding what’s the T-PWM super depth dimming technology, we will take you to review some existing dimming drive modes in the market closely related to it.

In LED commercial lighting, the key words we hear most often, such as: DMX, DALI, 0/1-10V, Triac, WIFI, bluetooth, RF, Zigbee…. Many people think it is the standard  of deciding the  dimming in good or not. But they are the input signal of dimmable driver. choose different input signals is mainly because of the environment (installation, wiring), function, cost, the late development of flexibility, has nothing to do with judging the dimming quality, the quality of dimming effect is mainly decided by the drivers output dimming way.

What is a good dimmable driver?  in addition to meeting the requirements of conventional parameters, also include following five points:

1.Dimming does not affect the LED light index;

2.Wide dimming range, dimming depth is less than 1%, can meet the requirements of more scene applications;

3.When viewing with human eyes, without any invisible flicker on the light in static states or adjustable process. Dimming is uniform and delicate;

4.There is no ripple or flicker when shooting works with cameras and other photographic equipment;

5.Meet the standard requirement in the testing of professional stroboscope and has no impact on human health. 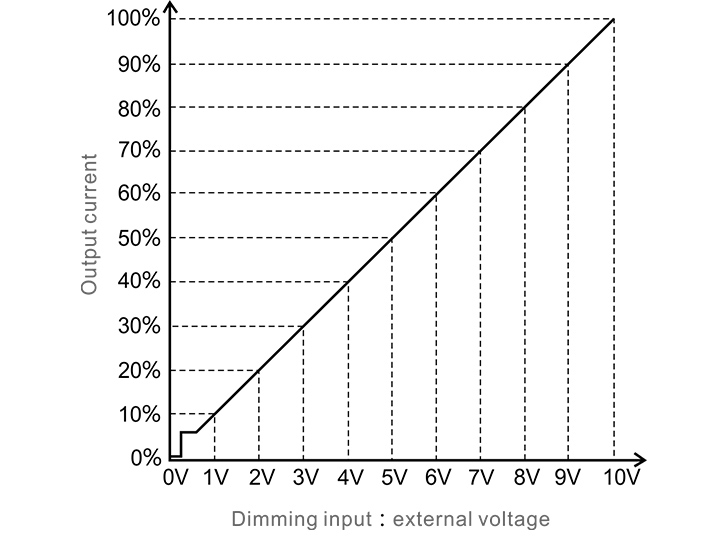 
Analog dimming/ CCR (Constant Current Reduction) dimming refers to the linear adjustment of LED brightness by changing the current passing through LED. Ideally, the brightness of LED is proportional to the passing current.

This dimming principle has following characteristics when dimming LED:

1.Without low noise in dimming. In the use of digital camera equipment photography, not easy to produce ripple and flicker.

1.It will cause color shift of the LED when current changes.

3.LED is not working with rated voltage and current and the LED life would be shorten in long-term working.

4.The LED driver conversion efficiency would rapidly reduce with the reduction of current, thus increasing the power loss of the power system. 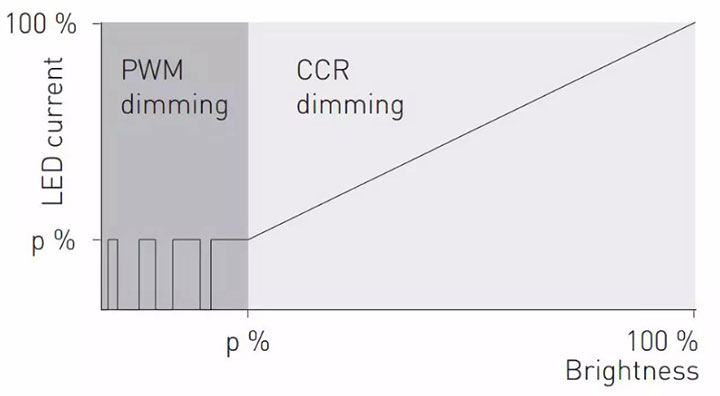 CCR（Analog）+ PWM Dimming means on the basis of analog dimming adding the PWM dimming mode at low brightness, The purpose is through PWM to compensate the problem of analog dimming range narrow and poor consistency of multiple unit, at the same time keep the advantage of non-flicker at high brightness dimming of CCR. But both advantages absorb but also defects. The practical problems are as following:

2.Keep the advantage of non-flicker at middle and high brightness dimming.

1.The accuracy of analog dimming is not high, and the problem of poor dimming linearity has not been improved.

2.Unnatural during analog and PWM transitions.

4.At Low brightness of PWM is technical difficulty. Most manufacturers have a response delay dimming after they add PWM dimming into CCR.

The actual shooting in a CCR + PWM dimming effect

Pulse Width Modulation(PWM), which principle is to change the on-time of forward current by the PWM wave to turn the LED on and off to achieve the brightness adjustment effect.

This mode is often compared to a high-frequency switching action, that is the LED is repeatedly at 0% and 100% brightness, so the advantages and disadvantages of PWM are obvious (such as stroboscopic problems at low brightness). The control and development of PWM technology determines the quality of PWM dimming. So commonly features of PWM dimming are also obvious:

2.High-quality PWM dimming, non-flicker in a wide range of dimming.

1.If the PWM program and hardware do not match well, the drive circuit would easily cause low noise during dimming.

2.If the PWM pulse frequency is very low, human eyes will feel flicker. And if the frequency is not high, even ordinary digital camera devices can capture ripples and stroboscopic phenomena.

3.If the PWM frequency is too high, although it will up to flicker-free standard, but the dimming gray level range will be reduced and have flicker at low brightness.

PWM is the most ideal LED dimming mode at present. However, it is a worldwide problem to improve the frequency of PWM without affecting the effect of the gray scale range.

It still needs certain technical strength to achieve excellent dimming effect. By using PWM technology and grinding it, we can overcome this problem to create a different lighting effect.At present, the minimum dimming depth of individual brands reaches 1%.

In 2016, LTECH has broken through the technical bottleneck to reach 0.1% dimming depth, and the stroboscopic index is the first domestic company to reach the high frequency exemption level. 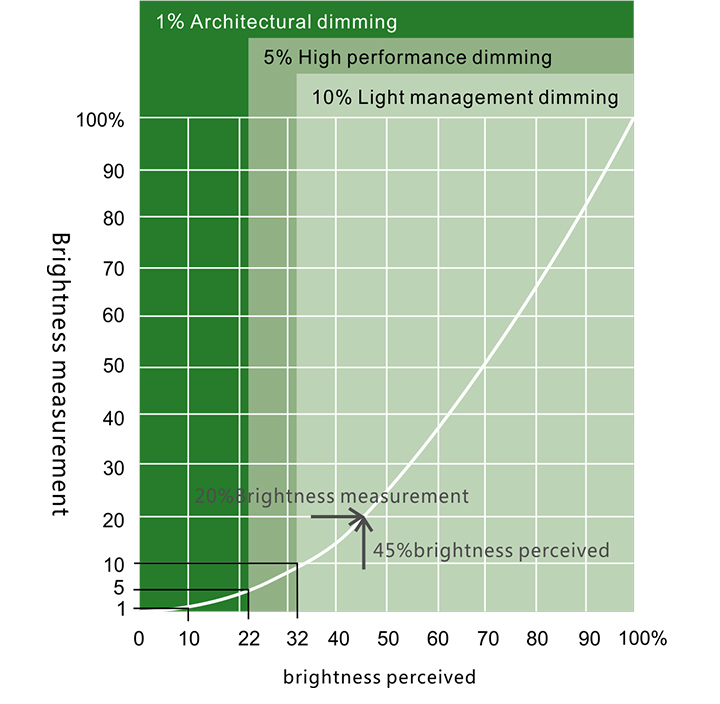 Due to the difference between human eyes perception and measured brightness, when the human eyes needs dark atmosphere, the brightness must be much lower than the measured brightness. Therefore, the difficulty in the range of dimming finally stays in the low brightness region which most sensitive to human eyes.At present, PWM dimming mode drivers of all major brands has their own optimization schemes, but there are not many effective solutions to achieve wide range, high depth, and flicker free throughout. 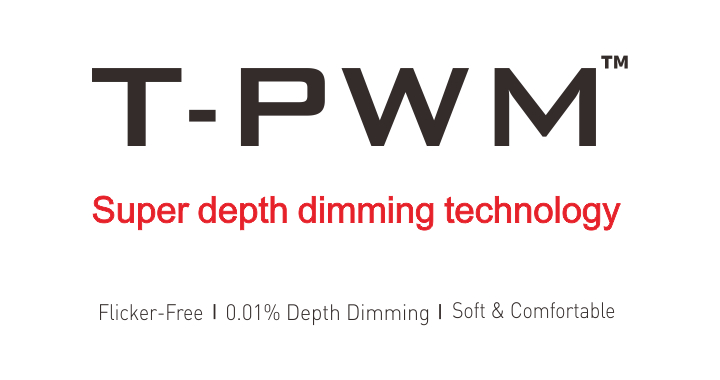 Compared with the previous three dimming methods, the revolutionary T-PWM Super depth dimming technology of LTECH has solved all the disadvantages of above dimming methods and retained all the advantages. Besides, T-PWM dimming also has following important breakthroughs:

There is no visual flicker in human eyes or during shooting and viewing, which meets the highest standard of professional stroboscope and has no impact on human health.